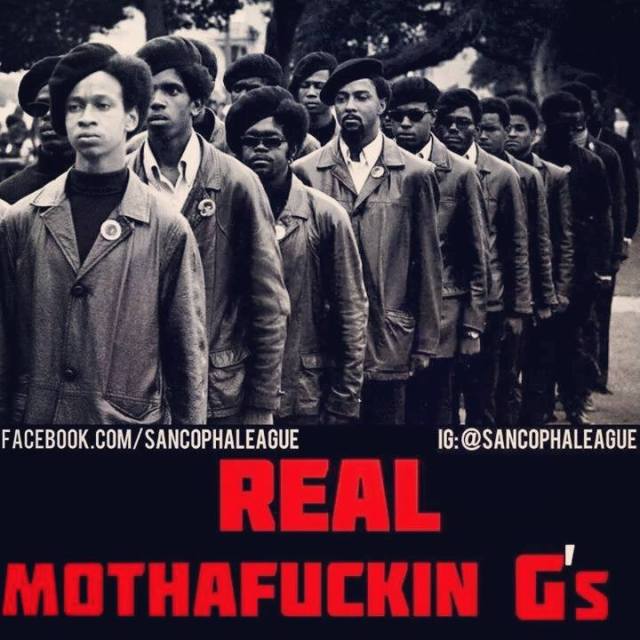 Today’s gangs are yesterday’s political organizations that have come to be our grass-root movements. They are our power-base; the iconoclasts of the era who have been manipulated into a community-destructive force. This is why Malcolm had to die; why George Jackson had to die; why Huey P. Newton had to die. For they understood that if we united as not only intellectuals, but also a militant faction, we would be dangerous. The fear of us aggrandizing our “Nation” strikes at the heart of the powers that be because we will be in a position to challenge them. Malcolm proved this; Jackson proved this; Newton proved this. And because of this they were murdered. So too what they stood for-the progressive and collective Black community.

The death of Malcolm’s message, Jackson’s message, Newton’s message was brought about by manipulating labels: Black supremacist, communist, criminals. It was manipulated by greed, ego, drugs, and high-powered assault weapons-all of which involved the manipulating of the four fundamentals of social interaction. Needless to say, this manipulation caused us to go from Black Panthers to Pirus; from “Forever Almighty” to “six poppin’, five droppin'”; from country boys to trap-stars, who in a grave attempt to escape poverty’s discordance were manipulated to self-destruct.
As if cowboys and Indians, we’ve shot ‘em up and bang banged for ego and turf as the world around us moves forward gaining the very prosperity sought in and created by our destruction. Seldom do we recognize this design and how it benefits the capitalist hunter. It is the reason why “dope” equates jobs and opportunity for ghetto youth and the ghetto youth in prison equate jobs and opportunity for law enforcement. It is the reason why our mothers fall to their knees daily in a pool of tears and blood.

But enough talk preaching the destruction and the power of the collective. This won’t dry mothers’ eyes unless something new is brought to the table that captivates the collective conscious of those who embrace this Tribalism.

As I continue to rot in the belly of the beast (i.e., prison) I constantly look to my surroundings for some solution to this tribal madness. Often, I ponder with others the question: Is there a solution to this madness or only partial solutions to a number of specific problems that create it? Ironically, I find many gang members who are just as tried of it as everyone else. They recognize the destruction and analyze the disadvantage it causes to their communities. Some have suggested solutions that entail a Tribal Metanoia. This seems only logical given the fact that the destruction that comes of our Tribalism will not disappear or change for the better unless fundamental changes are made to our train of thought.

Too often the subject of “sound” leadership or the lack of leadership altogether becomes the primary focus of our conversations. We take in consideration the fact that most gang members grew-up fatherless or lacking a strong male figure. Thus, the gang becomes the surrogate. We discuss the fact that gangs do not create Kings, rather statistics. This tends to give way to the question: If a gang or its leadership is ignorant, then what’s to come of its following? How can you groom the King when leadership is “tooting its horn”?

This is what we are faced with. The majority of today’s gangs consist of a leadership that is the poorest of the kind. It is the sort of leadership that is incapable of incorporating and constructing the human and social capital of the collective. It is the kind of leadership that constantly leads the collective to prison or the grave. It is composed of junkies of the sort with feeble minds captivated by vices and ego. Vanity is the source of its destruction-the best leaders lead without recognition. All the while it is living off its appeal, the flock gropes in the dark while being exploited.  It betrays the collective for a bag of blow. It poisons the well with its very example. It is the stone tied around the flock’s neck. They drown in poverty because of it. As a mere opportunist, this is where this sort of leadership prefers the flock to be. Envy and insecurity hold it hostage. It lacks a directive and consequently because it is without program, failure resonates within the tribe becoming a norm. Thus the tribe wonders about groping at the most senseless of acts to promote its esteem. Nothing ever comes of this sort of leadership but destruction, disunity and betrayal. It is worthless even in the eyes of its following. Yet they follow because they know of no other example.

As a street-level politician this sort of leadership knows and respects only what the ghetto has allowed it to entertain. It takes residence in the ignorance promoted by the environment. It bypasses the public library, college or the book a wise convict attempts to pass on the tier. Forsaken then are the lessons of sound leadership. Its own stupidity has disabled proficiency in personnel management, commerce and structure. This is the shot-caller the ghetto produces. Due to a lack of exposure to sound leadership, this is who ghetto youth validate as grand.

Leaders make Kings and Queens, not statistics. They are about taking the organization somewhere other than prison or the grave. This is the upmost of a leader’s responsibilities. Nothing less can be expected of him. None of the shaking and faking to be something he’s not. If he cannot fulfill his obligations then he must be rejected, dismissed and replaced. To do otherwise only assures failure. Just as a CEO of any major corporation would be fired for not cutting the mustard, so too a gang leader who is incapable of delivering on the fulfillment of each member’s aspirations.

Thus, the first object of a leader is always success. Success in the mind of the collective assures his authority to give directives and see them carried-out. Here is where his control lies. To control the image of success or to posses the means to succeed or fulfill one’s desires bestows him with a god-like authority. At times this is nothing more than possessing the economic means that sustain life. Unquestionably, this is what motivates people.

Moreover, with success there’s vision. Leaders must bring vision to an organization, because organizations are goal-orientated networks with an end in mind. They are more than simple machines for drug distribution and gang violence. And while vision is great, if a leader does not have strategies, people lose focus. They get frustrated. A leader, thereby, has to define reality and give hope-vision, strategy, people, and execution. This, of course, demands of a leader to thoroughly assess the organizations strategic challenges and key success factors that will determine whether it will thrive.

As the foregoing suggests, much intelligence, knowledge and art is required of a leader. He is proficient in personnel management. Most organizations have strenuous recruiting practices. Can’t just anyone get-on. Think about it. Microsoft just doesn’t hire anybody that walks through the door. A potential employee has to have a minimum, preferably high, degree of qualifications and experience. Otherwise the business gets nowhere. In the same respect so too a criminal organization. They recruit the most skilled of the criminal element that is capable of managing the responsibilities and resources they are entrusted with.

An organization is a complex structure of specialized roles. Each role has a specific function-governor, regent, and coordinator. They are compartmentalized and perform only a part of a broad range of specific tasks. An organization’s effectiveness reflects their degree of human and social capital and leadership’s ability to organize it. A leader must, therefore, assess each member’s ability to fulfill their designated role. This obviously requires of leadership to be familiar with what these roles entail and to make clear their expectations, demands and limits.

The ultimate end for a leader is to inspire the collective and its ranking officials to work together. Critical to an organization’s cohesion is an environment where both the foot-soulja and ranking officials can thrive. Here, the different roles that makeup the organization are vital. They go a long way when it comes to establishing group morale because people tend to rise to the occasion when and where duty calls and allows them to exercise their talents. In the organizational setting this often encourages them to better position themselves on the chain of command. Consequently, this makes for a more efficient organization due to the fact that the different roles and the rewards connected to them make for a competitive environment. People tend to perform at their best when challenged. This is especially so when rank (i.e., status) caters to their self-image.

Part of making for an environment where group morale and cohesiveness are at their highest is understanding the fluctuations of the mind. People are fickle. The flock must therefore be courted unceasingly. Leadership must ever strive to keep a hold of their conscious. It must lay a close hold on each member of the organization by staying in tune with their interests as well as their grievances. At times, many times, it may be convenient to use their own passions to keep them in check. Thus, feelings and opinions must be attended to assure group morale and cohesion. Moreover, this is vital to legitimizing a leader’s authority. People tend to grow dependant upon those who are sympathic to their emotional needs. They increasingly look to those who can take action on their needs and can alleviate their problems.

Group morale assures unity. Yet there can be neither where there is no body of ruling ideas adopted by all. The lack of a set of uniform principles (i.e., by-laws, rules of conduct, etc.) ensures a group’s disunity due to the conflicts that naturally arise from social interaction. “People are able to act together in an organized manner over an indefinitely long period of time because they have internalized a large number of meanings and values, commonly understood and adhered to. Social Disorganization-in the form of one or more of the familiar social problems [that arise from our Tribalism]-occurs when a significant proportion of meanings and values are no longer sufficiently internalized to guide the behavior … of the [collective].”” Thus, the inner-life of the organization must be regulated by a constitution (or creed), by-laws and a rank-and-file structure, which becomes purposeful in informing of the expected conduct of its membership and their objective. This is a function of the organization’s educational arm, which nurtures and develops human and social capital. To achieve an extensive social and psychological collective, leadership must indoctrinate and institutionalize controls that cater to the organizational structure and its objective. This usually entails rituals, symbolism, social pressure,, and tradition.

Over 4,500 people have tuned in to hear this interview of incarcerated author Ivan Kilgore discussing what inspired him to write his recently published book Domestic Genocide: The Institutionalization of Society. BUY THE BOOK TODAY ON AMAZON.COM! Click on the links below and hear some truth talkin’. http://m.ustream.tv/recorded/42784923?rmalang=en_US

Read excerpts to this highly controversial book at: http://www.willisraised.wordpress.com.

Articles written on Ivan in the San Francisco Chronicle and Oakland Tribune Newspapers: