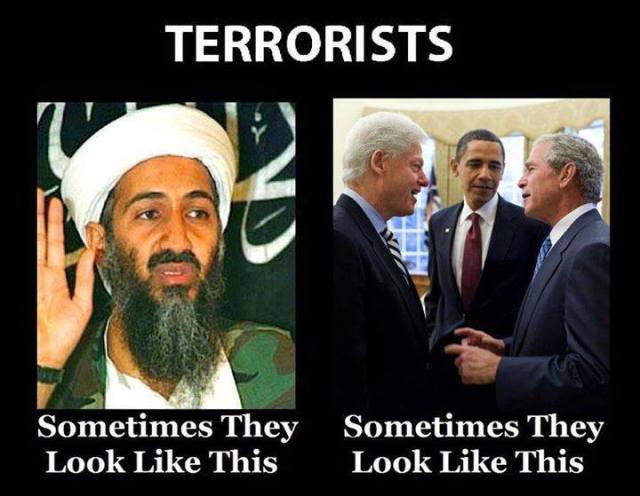 …the extent to which men have used violence as an instrument of social control in their often tyrannical pursuits of wealth and power. Particularly, U.S. government officials, dictators and terrorists have been cast in a light that allows little to distinguish except their respective titles. This has been done, needless to say, for purposes of highlighting the very fact that at the end of the day the particular ambitions and interests of powerful men, and at times not so powerful yet determined men, are the motivating factors that lead to large scale acts of destruction-be they in the name of justice or otherwise-so as to exploit fears and thus manipulate circumstances to their advantage.

As contemporary history has shown this is an effective means by which social control is both maintained and achieved. Needless to say, the concept has rooted itself in the conscription of social and political character at every imaginable level of public life. Accepted as such, this allows for us to examine the motives and violent methods incorporated by men at any social or economic level in American society. This calls for me to illustrate the concept functions all the same for those of us trapped in America’s ghettos.

Figuratively speaking, I want to feel and be like an American. You know, be a patriot, proudly sail my flag high on the hill, pledge allegiance, and all that. But this simply is not the gist what being an American is really all about. What of the theft, the oppression, the injustice? This also is part of the deal. I’m positive those people overseas don’t despise this nation for nothing. So, to be an American, to really know what it means to be an American, and not some fool living in the cloudiness of idealism-is to be everything but what America proclaims to be.  Therefore, in the world of power plays and ghetto politics I am the lil’ dog that snarls and stalks about with ambitions to bite like the big ones. Yet circumstances as they have been circumscribed to foster my ignorance, and thus my lack of resource, have forbid entry into their arena. So I’ve been forced to create one of my own where the concrete jungles of America’s ghettos are my stomping grounds-that is, my Iraq, Afghanistan, and Libya. Here the mission statement reads all the same: reap havoc and be King Manipulator so as I can secure the power and wealth created by my warfare. Thus there is no need to further rationalize, make excuses, or apologize for my violent behavior. It is what it is-the irony of my country: the American way plain and simple! For it has trained me well from K-12 to glorify and celebrate war. So much so, every history book I read implanted the Blueprint to dominate my world. And that’s not to mention how at recess I played war games as a child with toy guns and other weapons; built forts in the countryside; and watched movies and played video and computer games that romanticized and awarded the kill. This was only a drill for what someday would become real given the fact that in my community guns and drugs were sprinkled about as if parade candies.

That said, I’m unlikely to accomplish anything in the way of true wealth and power because I’ve been conditioned to play my hand for crumbs in a world that has been made to appear to have its limits. Thus the instruments of violence I have come to study and exercise are deemed selfish, meaningless and senseless in the greater scheme of things controlled by the big dogs. Again, my contrived ignorance and lack of resource has played its role to limit the potential benefit I am to gain from exercising a means that, had not been for my deprived state, has bestowed men with great influence and resource.  Because of these shortcomings, I have grown desperate with feelings of ridicule and failure. My country mocks me in my inability to pull myself up by the boot strap and rise above this poverty. So now I stalk about my lil’ Iraq in strife on an ego trip seeking empowerment and an identity to be revered. Here, the “block” and the crumbs it feeds me are my oil reserves nourishing both ego and material starvation. The so-called opportunities it provides are the linchpin to my world (in)stability. But that’s “TOP SECRET.” Therefore, a National Defense Fund is required: (1) A rocket launcher in my pocket; (2) A shoebox defense fund; (3) The “set” as my Marine Corps-“WE TEACH THE SKILL TO GET KILLED”; and (4) A warmongering spirit to fuel my ambitions to topple world dictators Larry Hoover, Willie Lord, Tookie Williams, Joe Morgan, and the many other “Gods in who We Trust.”

I am a patriot to my flag too! Its colors? Well, let’s just say they are not red, white and blue, rather red, blue or black-if not simply the color of money. Moreover, the manner to which it is paraded about tells of my national character. I’ll defend it to the death of me. So when the flag goes up and the drama ensues because the reserves are low, for example, if there is anything I’ve learned about being an American, it is to kill simply to secure the market; to maim solely to be respected; to destroy insensibly to forestall competition; and when all else fails, make everybody out to be suckers to rob until they are blind, broke, and taking a blast of my dope because success I have denied them do to my greed.

Over 4,400 people have tuned in to hear this interview of incarcerated author Ivan Kilgore discussing what inspired him to write his recently published book Domestic Genocide: The Institutionalization of Society. BUY THE BOOK TODAY ON AMAZON.COM! Click on the link below and hear some truth talkin’. http://m.ustream.tv/recorded/42784923?rmalang=en_US

Read excerpts to this highly controversial book at: http://www.willisraisedblog.wordpress.com.